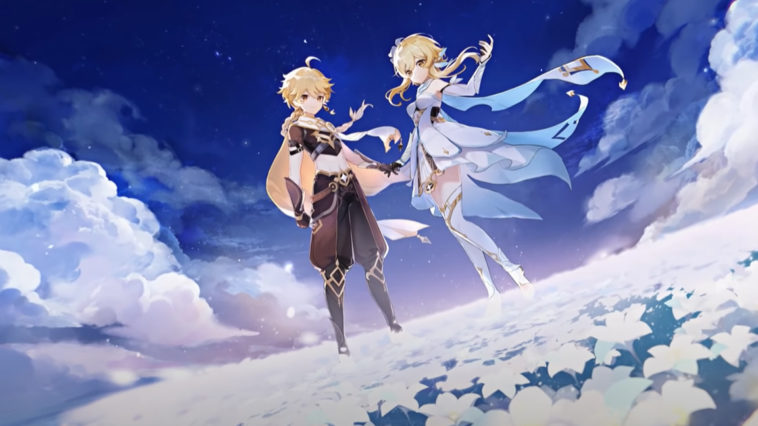 Genshin Impact is a free-to-play, open-world adventure game developed by miHoYo. This game contains a lot of puzzles to solve. It is also important to build your characters properly to defeat the challenging enemies of Teyvat.

The world of Teyvat is a huge map to explore. Solving puzzles, interacting with the world, and fighting enemies give you rewards as well as increase your progress in the game. This game also uses a Gacha system where you can get different characters and weapons to use while exploring the world of Teyvat.

In your search for your lost sibling, you will get the chance to explore the wonders of the land of Teyvat.

The land offers picturesque sceneries from wide meadows to vast oceans; diverse cultures shown in every nation’s cuisine and festivals; and the allure of magic imbued by the land and its history.

What is unique in this continent is that in here, elements exist. Gifted by the Archons, these elements provide abilities to the people that helped them create what Teyvat is today.

There are 7 elements that exist in Teyvat. These elements are also associated to the 7 nations of the continent, together with their respective Archons.

As the traveler you will be able to acquire these elements to help you in your journey. At the time of writing, there are only 3 elements that you can use in the game: Anemo, Geo and Electro.

As mentioned, Teyvat has 7 nations, each with their own god, an Archon. The element associated to these Archons are mirrored in the ideals and way of governance of the nation that they reside in.

As of writing, 3 out of these 7 nations are available for you to explore. (This is a work in progress)

DISCLAIMER: Please note that this map does not originate from us, but from genshin-impact-map.appsample.com!

A nation known to worship Barbatos, the Anemo Archon. Just like its element, the wind, it can also be called the land of freedom.

You will first encounter Mondstadt as you dive into the game.

Here, you will have to acquire and use the Anemo elemental abilities and uncover the truth behind the recent attacks in the city.  In these quests, you will meet the Knights of Favonius, the governing body responsible for keeping the peace and protecting the residents from any harm.

As you explore the land either by walking or by gliding, you will notice several windmills here and there. Aside from these windmills, here are some of the places you should take some time to explore:

Overall, there are 18 characters residing in Mondstadt that you can pull from the game and add in your team.

The land of contracts, Liyue is associated to the Geo element because of Morax, the Geo Archon. It is a bustling place where merchants from all around the continent comes. That said, it is no wonder that its governing body, the Liyue Qixing, are made up of merchants and business leaders.

Located at the east of Teyat, this land boasts stone forests, wide open plains, and tall mountains that you can explore to your heart’s content. Here are some notable places you may want to visit the next time you’re in Liyue:

In Liyue, there are 15 characters you can get a hold of and play in game.

Make sure to bank up your Primogems for your next gacha roll! A Hydro

character, Yelan will be dropping in soon! Also check out a new Inazuma character in the section below!

In the far east, you will come across the nation of eternity, Inazuma. It is ruled by the Inazuma Shogunate whose leader is none other than the Electro Archon herself, the Raiden Shogun.

Amidst the continuous thunderstorms experienced here, its red maples and cherry blossoms are a sight to behold. Here are some of the places you will encounter in this archipelago:

You can acquire and play as these 12 characters residing in Inazuma.

A new update just released with the addition of Yae Miko, an Electro

character in update 2.5; and the recent being Kamisato Ayato, a Hydro

For the next update, Kuki Shinobu, another Electro

character will be dropping in so make sure to grind those Primogems for this next roll!

Did you know that there is another playable character made available in the game who is dubbed as the “Saviour from Another World”? For some of you, you would have known her already from another game, Horizon Zero Dawn.

Aloy is a crossover character born from the collaboration between the Hoyoverse and The Guerilla Games. She is a Cryo

This 5-star character is available for players who reached Adventure Rank 20 or above through the in-game mail for free. Aloy was not promoted in any event banners in the game.

The Palace Dyed In Black

Join Kazuha in his journey of learning about the truth in this quest.

As the Irodori Festival is underway, Kokomi asks of you to buy books in town!

Be meticulous, careful and calm… you’ll need it in this particular flower arrangement event!

Appease Taroumaru’s anger by knocking some sense into him in this timed battle!

Feeling a bit rusty? Well, no better time to hone your skills by challenging Mishima Michitoshi then!

Albedo’s painting is finally being revealed, but wait, you need to look for “that person” first. And, guess who it is? Maybe… a new face with an affinity to water?

Bring the electro barrier down to finally access the Tatarasuna Teleport Waypoint.

In Search for the Tanukis

Complete this puzzle as you find the whereabouts of the tanukis.

Solve the Puzzle of the Relics

Figure out a solution to this puzzle that involves the Relics of Seirai.

Lowering the Water at Amakumo Peak

Claim your treasure as you lower the water by solving complex puzzles.

Provide Neko with a Statue

Help solve a problem of the Stone Human.

Fulfill Tsuyuko’s request and get ready to scourge the Watatsumi Island in the process.

Follow instructions as you solve puzzles to reach completion of the quest.

Find all 4 old stone slates and get an Amenoma Kageuchi sword blueprint in return!

Visit the resting places of the old samurais.

Locate All Electroculus on Watatsumi Island and Seirai Island

Collect all electroculus on the islands of Inazuma!

All Viewpoint Locations on Watatsumi Island

Decorate your home and make it unique with a War Drum!

Angling Ace and No Mistake!

Catch as many fish as you can before the timer runs out!

Be Thy Pale Beams I Solitary Rove

Brace yourself as you try to catch the Lunar Leviathan of the Sea!

Equip yourself with the Moonstringer Fishing Rod and finally catch the magnificent Moonfin fishes!

(This is a work in progress)