DNF Duel allows you to choose between a various array of characters. Each character has its own special moves and combos. This guide will show you the command list for the Launcher in DNF Duel.

The Launcher is one of the characters you can choose in the DNF Duel. She uses a huge array of guns as her weapon. She can switch between machine guns to rifles and rockets. This character specializes in long-range attacks and combos.

Above is the list of commands for the launcher. She specializes in both ranged and multi-hit attacks and can delay her hits. Her special moves include her Grenade Launcher, Cannon Ball, Spriggan, and Sniper Rifle.

You can activate or change your weapon using the directional pad with the skill button. She also has special MP moves. Her special moves include the Charge Laser Rifle, BBQ, X-1 Extruder, mk2 Lancer, and Quantum Bomb.

You can trigger her special MP moves by using the directional buttons and the MP Skill Button. The Launcher can also overheat, which increases her white damage when her attack is guarded against.

Press the Awakening Skill button for Ancient Trigger when awakened. 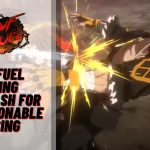