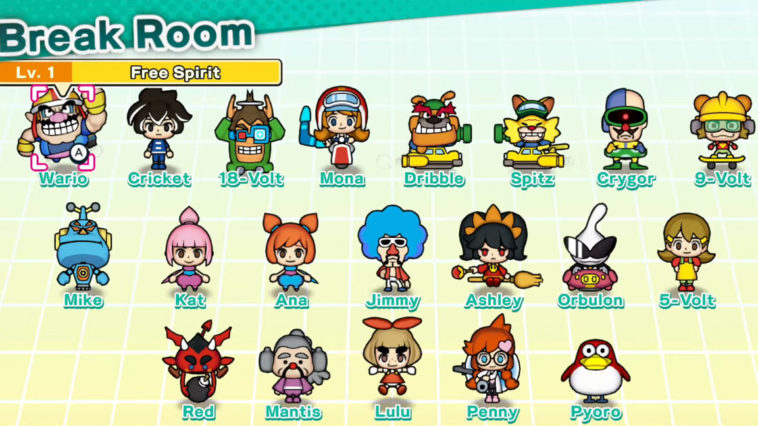 WarioWare has one of the most interesting and fun cast of side characters a main hero in the Nintendo world can have. With such a weird and quirky crew, we are bound to have some fun, right? If you’d like to know more about these guys and see what they’re about, here is a little article where you can see a whole list of the characters and some quick details about them!

All Unlockable & Secret Characters List – WarioWare: Get It Together!

So, here are the characters you can recruit and unlock in WarioWare Get it Together!:

I doubt there is much there could be said that you don’t know about this guy. Main character of the game, game developer extraordinaire!

In terms of gameplay, he flies around in his jet and punches in front of him.

One of the coolest guys out here, Young Cricket will jump around… a lot!

His skill set includes jumping. And that’s all he can do. He can also jump really high. So he’s basically Mario.

With a really interesting name, 18-Volt has really weird gameplay capabilities. He cannot move. Not even a bit. But he can shoot halos from his head.

Flying around with her scooter and her boomerang, she can never stop from moving. Quite the opposite from 18-Volt. She can hit stuff with her boomerang though, and that’s when she stops moving.

This great pair is specialized in two player multiplayer, since both of them fly on taxis and can shoot their weapons just one way… Either left, or right.

If you get one of them in singleplayer though, you will be bound to have a really fun experience.

This genius turned cyborg can swim through air! No, not fly, swim. That’s why he’s wearing an inflatable, right?

Part of the Volt family, 9-Volt has a skateboard that never stops moving. Actually, he does stop moving when he uses his yo yo to hit the skies.

Mike is Dr Crybor’s special creation. A robot that can’t sing, but does anyway! He can fly around and shoot musical notes upwards. Him and 9-Volt have kinda similar powers.

Like Dribble and Spitz, these kindergarten ninjas can only shoot shuriken in one direction, but they also continuously jump, without ever stopping.

Jimmy is a true dancer, a fan of the 80s. The only way he moves is if you steer him in a direction and attack. He flies around, attacking non stop if you so desire.

Kinda like Wario, she flies around on her broom and shoots spells in the direction she is facing. She is also emo.

Otbulon, the alien weeb, has a cool spaceship that can kidnap things from above. So, basically, he can suck stuff that’s under him.

The nice and friendly mom of 9-Volt sleeps most of the time. But there is a spirit that can teleport her, that sends shockwaves whenever she does…

The friendly neighbourhood demon Red can fight like Orbulon, except he throws bombs under him.

Cricket’s master, Mantis is basically Cricket on steroids. He can jump, and he can also stick to the walls he jumped on. Spider-Mario?

Cricket’s fan, Lulu can jump and float, and she can also do big ground punches from where she was floating!

Granddaughter of the mad scientist Dr Crygor, Penny has a huge water gun that moves her around due to recoil.

Also known as the biggest legend in town, Pyoro can shoot his tongue like a frog and that’s… it.

READ NEXT : Minecraft: How To Install Seus Shaders

WarioWare: Get It Together! 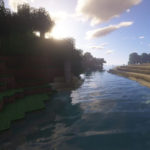 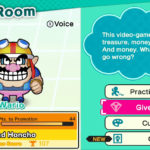