Starship Troopers is rich with lore and interesting characters, like John Rico, Carmen Ibanez, and Carl Jenkins. The many faces of Starship Troopers can be remembered fans of the sci-fi franchise. But the big question is, are there any characters from the movie that will shop up in the game?

Starship Troopers Terran Command: Are There Characters From The Movie?

The game has been stated that it will follow the lore from the book and the movie, but the developers, Slitherine, have also said that this game will be set in the universe of the film. So, will we see the ever-gorgeous Denise Richard play Carmen Ibanez? Or the handsome Casper Van Dien as Johnny Rico?

Well, according to the marketing director Marco A. Minoli, Starship Troopers: Terran Command will not feature any familiar faces. Neither from the book, or the movie. Some might be disappointed at this decision, and they have the right to do so.

While the game is set in the film universe, and set after the Battle of Klendathu, the game chooses to focus the story elsewhere. Slitherine says that they want to build upon the story of the movie, and what happens after the famous battle that gave humanity a step to winning the war.

ALSO READ: Can You Play As The Bugs In Starship Troopers Terran Command? 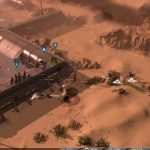