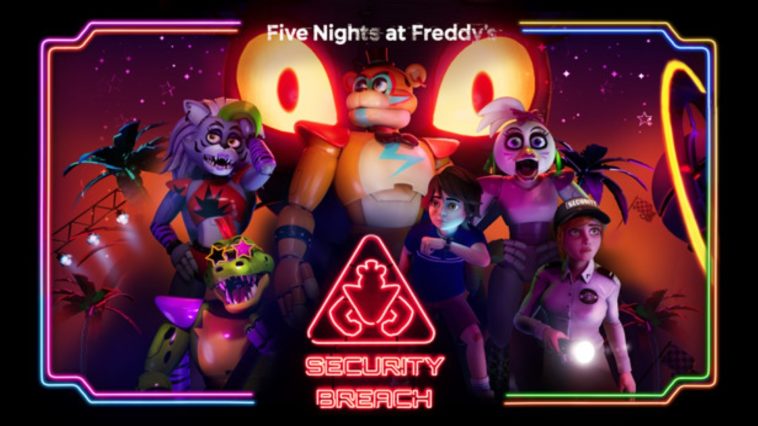 Five Nights At Freddy’s (FNAF): Security Breach is another installment of the FNAF franchise. It is a single-player survival horror game where you will get to play as a little boy, Gregory. Your task together with Freddy is to survive until morning, look for clues and solve the mystery behind the Pizzaplex.

Play together with Freddy as you try to solve the mysteries of the Pizzaplex in this survival horror game. Five Nights At Freddy’s: Security Breach offers new mechanics and more depth in the world of FNAF. Hunt for collectibles and either run, stun, or hide from animatronics and security robots as you try to survive until morning.

The Pizzaplex is very, very wide. You’ll probably get lost one way or another trying to run and hide from animatronics and security robots, or even while fulfilling a quest or just hunting for collectibles. For this, you will need to always rely on your map that you can access in your Faz Watch.

The Pizzaplex overall has 4 levels, a ground floor and 2 basement areas. Indicators as to where Freddy is and where you can locate the charging stations will be helpful as you play through the game.

Here are some of the main attractions that you can find in the Mega Pizzaplex:

WARNING: Spoilers ahead! Read with discretion.

There are different animatronics that you will meet as you enter the different areas as discussed above. Browse through them one by one and be ready when you encounter them in game.

Throughout the game you will come across gifts containing passes and collectibles. These collectibles include plushies, figures, shirts, masks, posters, pinatas and even upgrades.

Here are the locations of the different collectibles spread all over the Pizzaplex. (This is a work in progress)

Note that it will be easier to hunt for collectibles once you have Roxy’s eye upgrade on Freddy.

Capture photos of animatronic cut outs all over the place to open a secret door!

Help yourself (of course, you’re Gregory) to these sweet upgrades to successfully complete the game!

Get all the upgrades to lengthen Freddy’s battery life. This will surely save you the time from going back and forth to the recharge station!

In your Faz Watch, you will see a list of quests that will guide you to move forward with the game. Here is our quest guides that you can use (This is a work in progress):

Have access to the main lobby by getting a hold of a pizzaplex entry pass!

Survive the chase as you find the lobby

Left alone, you will need to survive the chase as you find your way into the lobby.

Navigate your way to the Main Lobby

Run and hide from animatronics coming your way as you reach the main lobby.

Get your pass upgraded!

Obtain your pass by hacking the machine with the use of a fridge magnet.

Free Freddy from his room using a Freddy Photo Pass.

Getting the Security Badge at the Daycare

The light is out and you will need to turn on the generators quick to survive.

Exit the Daycare and immediately search for a recharge station.

Navigate your way from the Lost and Found and find Freddy.

Distract Chica in order to get to the Loading Dock.

Navigate your way in the laundry room filled with security robots to return to Freddy.

In the Backstage Office, you will have to find for lift controls to help you escape the room.

Bring life to the main stage and use it to move forward with your mission.

Get Security Badge from the Warehouse Office

Push a lot of buttons and open doors as you try to claim the security badge while having tons of endoskeletons at your trail.

Get to the Parts and Service

With endoskeletons still at your trail, find your way to the Parts and Service.

Follow the instructions as you connect Freddy’s head to his body.

Head to Chica’s room to claim a Party Pass.

Get a Fazer Blaster

Search for the Monty Mystery Mix in Bonnie Bowl.

Lure Chica to the trash compactor

Claim Monty Mystery Mix and use it to lure Chica to the compactor.

Defeat Chica and get her voice box.

Head to Monty Golf and find the Faz Camera.

Head to Roxy Raceway. find the kart and the robot head to finally stop Roxy once and for all.

You found the robot head but its broken. You will need to head to the repair station at the West Arcade.

Fill splash buckets as you try to evade and escape from Monty!

Head to Daycare Theater and claim the control key for the maze.

Solve the Puzzle in Mazercise

Follow these instructions to solve the puzzle and finally have your way to the vent.

Try to survive while Freddy turns off the alarm. After successfully doing so, escape the Prize Counter by accessing the elevators.

There is no single path that a player can take while fulfilling the quests stated above. Some quests are even hidden and needs to be done first to unlock a specific ending.

There are 6 different endings that you can get in FNAF Security Breach. Here is an overview of all the endings (this is a work in progress):