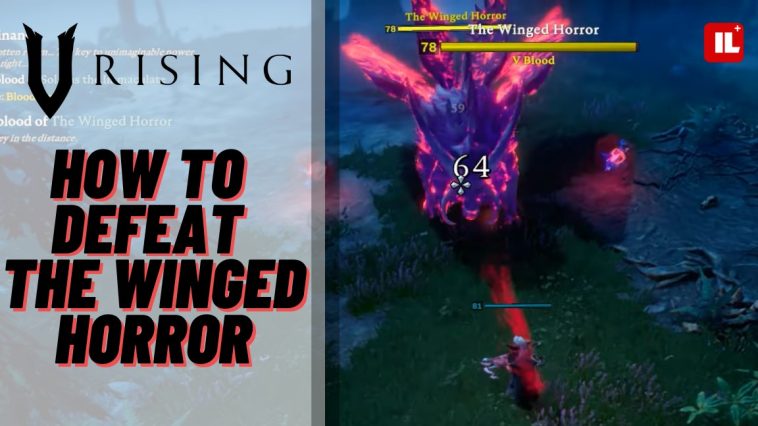 Congratulations on coming this far into the scary beasts that you can beat. The Winged Horror is the third to last mini-boss that you can go after to get his good reward. He is extremely tanky and will take a lot of effort and patience to defeat him. I mean this is the pet of Dracula himself! Let’s see where to find him and the best ways of taking him down.

To locate and start tracking this scary beast, you shall need to build a Blood Altar. You can unlock it while playing through the story and in a while, you will be able to construct it and place it anywhere in your base.

Interact with it once it’s built and you will see in the list of mini-bosses on your left The Winger Horror. He is a level 78 extremely tough and dangerous opponent and actually third to last mini-boss that you need to beat to get his rewards.

Press the Track Blood button and you will see a blood trail leading in his general direction. You know he will be on the map easily to find when you have Tracking the blood of The Winger Horror(I can sense my prey in the distance) on your left.

Unlike the other mini-bosses that you will need sometimes hours to locate on the map because of their roaming, The Winged Horror is stationary and easy to pinpoint on the map. He can be found here:

There is a catch though. Once you come here you will notice nothing but a mountain. The blood trail will lead you into an unpassable stone wall. To be able to get inside you will need to transform into a Bat Form and fly on top of that mountain. You shall see the Winged Horror sitting at the very peak.

Do not land next to him with your Bat Form as he will deal a big amount of damage. Land on the right side next to the trees where there is a clearing to catch your breath and drink up on potions to give you an edge over him.

He can do a head rush to push you over. He’ll stand in place for a second and then use his wings to throw himself at you. This can be easily avoided if you dodge at the right moment.

Be careful from his attack with his tail. You will think that he can’t hit you while he isn’t looking at you, but he will wig his tail and fire a couple of long-range attacks that split into more and are guided towards you.

If he leaps into the air and starts flying, make sure to clear away from his path because he will do a ray of fire breath around his area. This circle of AoE damage will throw a couple of fireballs bouncing all over the area.

When you are running away from him and dodging(and you will need to be doing this a lot) make sure not to step on the fire circles all around. These can damage you and slow you giving him a chance to strike you. He will shoot these while flying in the air above you.

He can do a long-range attack that’s located in a full big circle around you. It will start slowing you down only to ice strike you up in the air if he catches you. Be way of this as it does a lot of damage.

When he gets somewhere at half HP he will keep moving his wings while grounded. These will spawn fire orbs that will fly all over the place. They are very hard to dodge if you are standing next to him, so make sure to back off.

He is an extremely tanky mini-boss and that’s the main problem really. It will take time to take him down and he will constantly be throwing something your way. You will have time to back away from him and maybe use some healing. Careful because he will keep combining his attacks.

Once he is down, go next to him and hold F to extract his blood and get his rewards. Good luck! 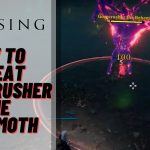 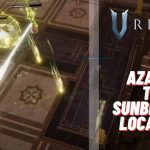